Mid 2016 update: In 2013, Alibaba signed an agreement with Louis Vuitton establishing they wouldn’t allow the sale of replicas of their brand and, true to their agreement, there are barely any Louis Vuitton replicas left in AliExpress. Furthermore, there aren’t any original handbags either.

If you already tried typing in Louis Vuitton in AliExpress, you might have seen something like this:

Proving there really aren’t any original products by the brand in AliExpress. Nevertheless, there is an exception…

I haven’t found any, but one of our readers contacted us a few weeks ago to tell us there are some originals: she had purchased an original second hand Louis Vuitton handbag for pretty cheap (compared to new original Louis Vuitton bags).

This being said, the seller only had a few units and ran out of them pretty fast, so now (mid 2016)  we haven’t been able to find any.

How to know if a LV bag is original

Recently, AliExpress has been improving their interface, giving more options to the sellers to describe their products. As we saw in the article about cheap iPhones, now sellers can specify the condition of the product they are offering. Just so you get an idea, heres is an iPhone described as “used”:

As you can see, the condition of the product (in this case an iPhone 6) is specified under the ratings and I imagine that whenever more second hand Louis Vuitton bags show up, they will be described the same way.

The only problem you will have when looking for Louis Vuitton bags is that AliExpress blocked “Louis Vuitton” from their search tab, so even if there are original products, you won’t be able to find them. It’s the same thing that happened with the cheap Ray Ban glasses in AliExpress: there are some originals, but they are so few, AliExpress still hasn’t noticed and to avoid the sale of replicas, the block the search.

As you won’t be able to find anything looking for Louis Vuitton, you are going to have to try other expressions such as “Louis Bag”. If you do this now (mid 2016) you probably won’t find any, but things may change soon.

Instead, you will find Chinese brand handbags with designs inspired by Louis Vuitton. Let’s take a look.

Although there aren’t any original Louis Vuitton, you have some pretty good alternatives in AliExpress: Chinese brands inspired by the vintage style of Louis Vuitton bags and wallets.

But aren’t these replicas?

No, they aren’t as proven by the New York court and Vogue. You see, Louis Vuitton recently tried to sue the Chinese brand MOB (My Other Bag) for making replicas of Louis Vuitton products. 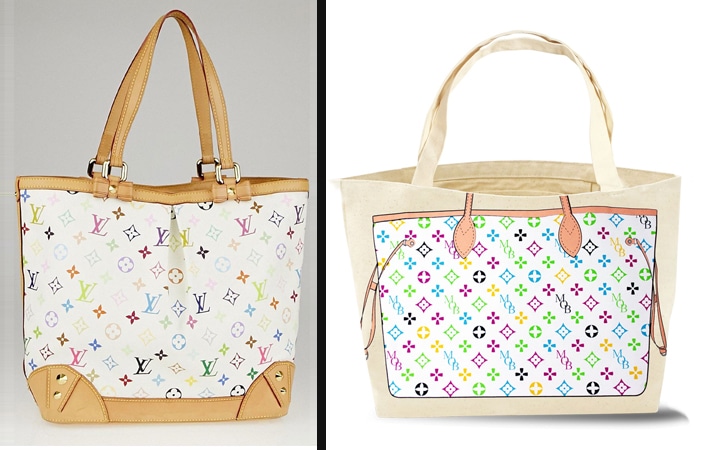 The bag shown in the left image is an original Louis Vuitton bag, while the one on the right is a MOB model Louis Vuitton considered a replica. However, the court decided to favor the Chinese brand stating that these bags were merely “parodies of a brand”.

As a consequence, AliExpress sellers offer handbags inspired by the classic Louis Vuitton pattern for 50 or 60€ (you can see them here) in a completely legal way.

How do I find these cheap Chinese clones?

Although they are sold legally, they still aren’t allowed to mention the registered brand “Louis Vuitton” to promote their products, so instead they use similar expressions, such as Louis Bag.

Other models inspired by LV bags

One of the most famous models by Louis Vuitton is the Speedy. Here is a side by side view of the original and its Chinese “equivalent”:

As you can see, its pretty similar, but the logo is completely different, making the sale of this product completely legal.

You can see all the Speedy bags inspired by Louis Vuitton by CLICKING HERE. 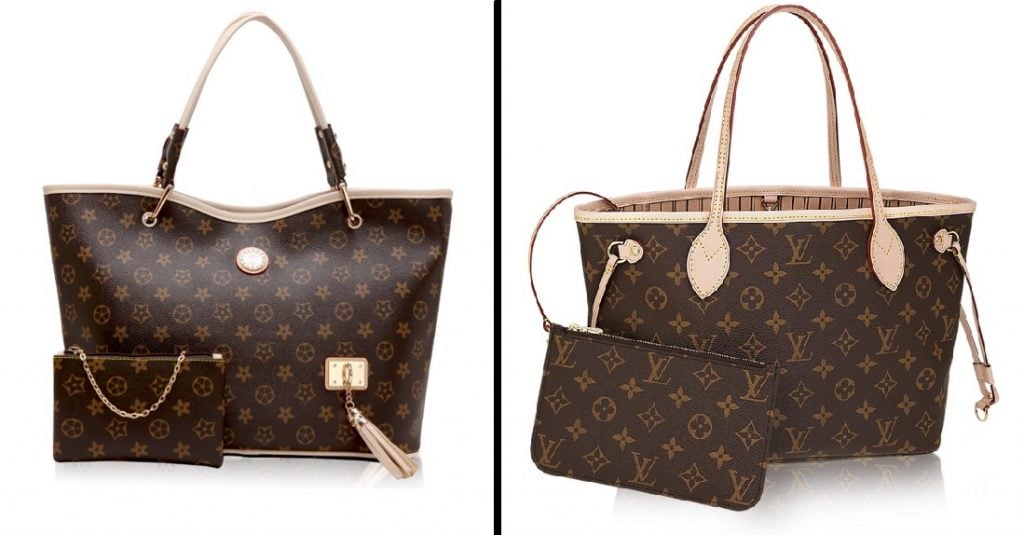 These handbags also looks very similar to the original brand, but some difference can be seen, such as the handle or the pattern. Another big difference is the price, you can get them for only 30€, amazing considering originals can go up to 1000€.  🙂

To see the bags inspired by Vuitton Neverfull CLICK HERE. 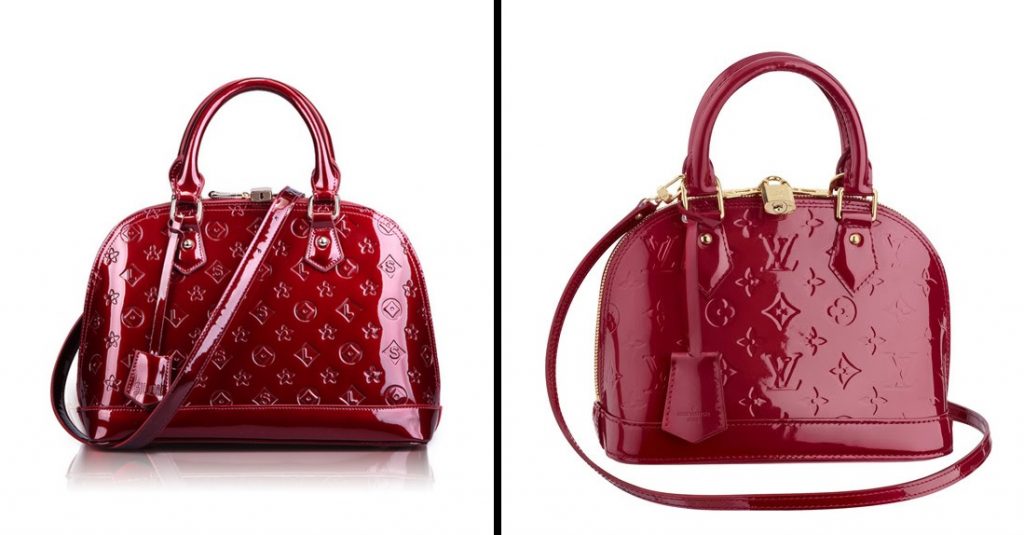 Just like the other ones, this bag is pretty similar, but has a completely different pattern.

You can see all the Alma Vernis style handbags CLICKING HERE.

You can see all the bags inspired by the Damier Trevi by CLICKING HERE.

The same thing does for any other model

If you are looking for bags inspired by Vuitton model, follow the same method: type the name of the model (without mentioning Louis Vuitton) + tote/handbag.

Are these handbags made out of leather or plastic?

It depends on the price but, as a general rule they are made out of polyester or cloth and polyurethane (PU), a good quality synthetic material very similar to leather. You also might be able to find some real leather bands, which can be told apart through their price (they won’t go for less than 60 or 70€) and the specifications given in the description of the material:

You might find a few sellers mentioning “leather” in the description of they 20€ products, but I wouldn’t pay to much attention if I were you. Its better not to take any risks, especially because PU bags tend to be pretty good quality.